So here are today's announcements, along with links to find out more about each.

Fruits of this partnership include:

You've probably heard of a few of these before and already recognise them as well established component vendors. Well they're all now Xamarin.Forms Partners who are making their wares available as Xamarin Forms components.

and at these links:

A fully fledged profiler for Xamarin apps, available as both a Mac and a Windows app.

Currently in public preview with a caveat of "be nice": http://www.xamarin.com/profiler

Real time code execution, ideal for practising with new features and APIs, or for instant execution of problematic pieces of code to help identify issues.

Miguel gave us a demo of an Android app, but 'forgot' to start the Android emulator ahead of time, so we waited. He asked how our families were to pass the time. Little did we know he was nicely setting the scene for the announcement of the Xamarin Android Player - a new Android emulator available for both Mac and Windows. The Mac version is written using Xamarin.Mac and the Windows version is written using WPF. There followed a very impressive demo including a quick startup time (quoted as 17s, vs 1m17s for the standard Android emulator) and playing of a motorbike racing game with full screen animation, which ran very smoothly and showed us all that Miguel's skills do not include riding a motorbike, at least in this game!
Apps can be deployed by dragging and dropping APKs, simulation of battery state and location are included, as well as full ADB integration. This is also currently in preview, and at present only one image is available - Android KitKat 4.4.2, API Level 19 in a single form factor. A full range of images is promised as and when this is available for full release. More good news is that it's currently free for current Xamarin subscribers.

A few very nice enhancements to this tool were announced.

Xamarin.UITest is a new automated testing framework, allowing tests to be written in C#. These local unit tests run against an emulator or a device and report their results back into both Visual Studio and Xamarin Studio. Once tests have been satisfied locally the app, with its tests, can be pushed to TestCloud as is (soon to be available as an option directly from Visual Studio).

TestCloud already supported the capturing of screenshots during tests. This has now been taken a step further with screen recording, allowing playback of tests.

The last piece of the puzzle announced at the end of the keynote was Xamarin Insights - a complete analytics and error reporting tool with some impressive features, including user identification with the option to contact a user directly to let them know that an issue they experienced has been resolved. Obviously this won't always be appropriate for many reasons, but if it is this is a very powerful feature. Probably more relevant to enterprise apps.
A number of metrics are available covering more than just the number of crashes / unhandled exceptions. The total number of sessions can be shown, so if 50 crashes are reported the impact of this can be accurately assessed, i.e. 50 crashes out of 51 sessions means you have a big problem, but 50 crashes out of 5m sessions is somewhat less of an issue.

These short paragraphs don't do the product justice - take a look at it here:

It's currently free for existing Xamarin subscribers whilst it's in preview. Pricing plans are promised which are kind to existing subscribers when it's available for full release.

Finally we were all introduced to Susan Bennett - the voice of Siri.

So, lots to digest, and lots of links to follow. Happy reading, and playing!

After this came a full day of great conference sessions, plus continued hacking in the Darwin Lounge, nicely rounded off with the Xamarin party at the Aquarium here in Atlanta and a walk back to the hotel with some of the Xamarin University trainers and the legendary Charles Petzold. A good day. 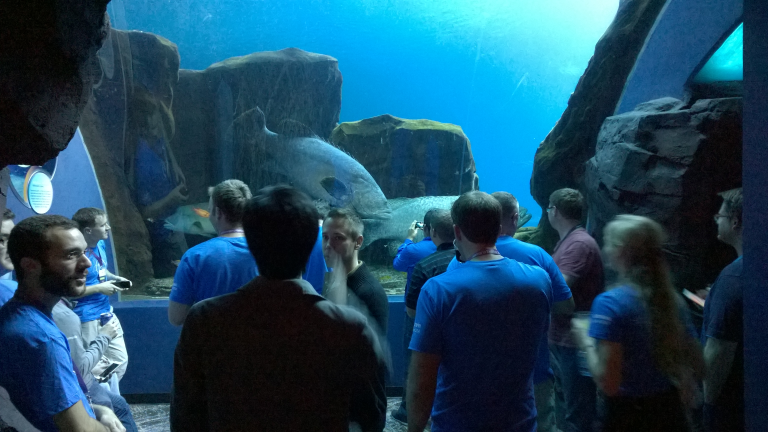 I'm having a quick interlude from the AD B2C posts (which will continue shortly) to jump into push notifications. At the time of writing, most of the documentation and tutorials out there on getting push notifications working on both Android and iOS using Azure Notifications Hubs appear to be a

This is the third post in a series that covers creating a Xamarin.Forms app and an API, both secured by AD B2C, detailing the Azure configuration and the necessary code. It builds on the previous two posts, but can be read in isolation. In this post we'll create the

This is the second post in a series that covers creating a Xamarin.Forms app and an API, both secured by Azure AD B2C, detailing the Azure configuration and the necessary code. It assumes that you've already completed the Azure AD B2C configuration detailed in the first post in this